Posted by gaomingwu on October 21, 2012
Posted in: Uncategorized. 1 Comment

1. I have been working my ass off for almost three weeks, simply because Rama needed me to take over a project and get the results urgently. I did it well and he said he would buy me a lunch to show his gratitude. But still it was pretty painful to get the work done in such a short time frame. Jiankun comforted me by saying, “Mingwu, since Rama will buy you a lunch, you should have been happy about it.” I was like, “I would rather buy him a lunch if he didn’t ask me to do this…”

2. I took another laser surgery on my face three days ago. As always I didn’t use any numbing creamm or anything like that, basically because I don’t wanna risk anything that may hurt my brain. All the doctors and nurses are super impressed. They said I was the toughest patient they ever met, especially I didn’t even need to take any break during the surgery even under no anesthesia.

As always they complimented my toughness by the end of the surgery. I tried to be honest by saying “Yeah, I think I am pretty mentally tough and can handle pain well.” One nurse was like, “Good for you! I think that will help you a lot once you get married…”

3. We were watching TV introducing an animal named Sloth, which does everything super super slow including walking, climbing and even fighting. But the TV showed a scene of two sloths mating, which surprisingly was done pretty quick. The host made a comment like, “Probably sex is the fastest thing sloth has ever done…”

4. For some reasons Charli prepared the recipe for John and me for the house dinner on Sunday. We cooked the food based on the recipe, but it tasted a little bit weird to me. So when people got downstairs for dinner, I was like, “If you guys don’t like the dinner, blame Charli please. That’s her recipe…”

When cooking the house dinner with John just now, I found a baby pepper inside a mommy pepper as below. How cute it is!. 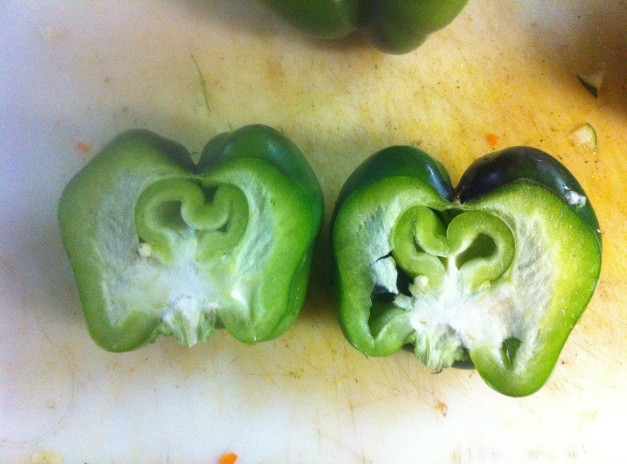