Posted by gaomingwu on June 17, 2019
Posted in: Uncategorized. 2 Comments

1. Brian C, John and I went out jogging during lunch. Brian said he needed to change really quick. I asked, “How quick? As quick as John’s sex?”

2. Anahis said her parents would like to bury their bodies after death. Shreya thought it was a waste of land. I agreed and joked like, “Anahis, can I suggest your parents bury themselves vertically instead of horizontally?”

3. Brian C is very eloquent. I joked with him like, “Hey Brian, I like the way you talk. You sound like you know what you are talking about…”

4. Red Sox played World Series against LA dodger last year. On Oct 26th, the two teams played 18 innings and Red Sox lost. It was the longest game in world series in term of innings and made many records in MLB history for its lengthy process. The next day, ESPN website claimed the game to be the longest loss in Red Rox history…

Visited Smoky Mountains the weekend before the last. Totally unreal synchronous fire flies! In Absolute Awe! The meaning of my life has been temporarily fulfilled. Met many amazing animals too! So much fun! 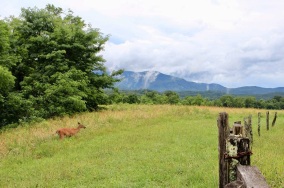