Posted by gaomingwu on June 24, 2012
Posted in: Uncategorized. Leave a comment

1. The project sponsor is coming next Tuesday, and I finished the last piece of work before 2pm of Friday. Around 4pm Ram and Carolos came to my office for updates and I told them everything is done and asked them if they would like to take a look of the demonstration. Since everything seemed straightforward, Ram and I both believed the demonstration can be seen next Monday. But Carlos said he wanna see it. So we went to the lab and started the experiments demonstration.

I was operating the experiments and accidentally burnt and damage the chip on the circuit board due to the malfunction of one device’s detector. I admitted it was my fault, but Ram disagreed and said that was nobody’s fault.

So I was like, “No, that is Carlos’ fault. It was him that wanna see the demo before the weekend.”

“No… that was team work…” Carlos fighted back.

2. I was waiting in the parking lot to give Bo a ride home and saw Carlos. So we chatted and caught up a little bit on the project. Bo showed up and Carlos told him that, “Hey, you be careful of this guy (referring to me). He is horrible.”

3. One day, Ram came into my office with Carlos and kidded me like, “Mingwu, Carolos and I come to beat you up…”

4. Katie is one of the 50 something interns among us. One our third working day, she sent all interns an email asking if people would like to have lunch together. Since all of us only meet twice before that I can’t remember who is who.

So I replied like, “Hey Katie, I would love to have lunch with you guys, but I can’t remember how you look. Can you give us more information in addition to the fact that we all know you look perfect?”

1. I played softball one more time in GE employees’ league on Tuesday and did a good job on defense side. I got two players out and my teammate thought I played well taking it into fact that it was only my fourth time to play softball.

2. I did the climbing with Andras Kiss last Wednesday which was really really cool. You can tell how high the edge is in the below picture… 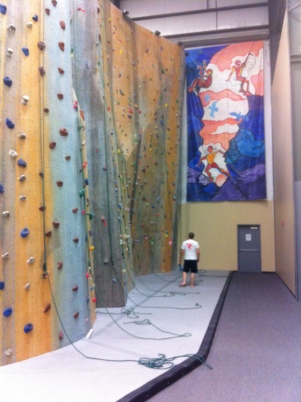