Posted by gaomingwu on June 26, 2017
Posted in: Uncategorized. Leave a comment

1. We went out for lunch and I saw a scar on Suzy’s neck. I asked her, “What’s going on with the scar?” Did someone try to kill you?”

Koreen was like, “Yeah, I tried to kill her once but failed. There were some hard feelings right after that, but we made it up after a few weeks. Now we are still friends..”

2. We were having lunch and Jixiang said he believed pork did a better job making people feel full than chicken. I totally agreed like, “I agree. If one guy eats a pig and another guy eats a chicken, the one who eats a pig will probably feel fuller..”

3. Jason would like his elder son to learn Chinese, but his son would like to learn Greek. So he showed his son the facts that all his toys were made in China and all Chinese food was made in China. Eventually his son became interested in learning Chinese. I joked with Jason that he manipulated his son, but Jason claimed his innocency saying his son made his own decision totally on his own.

Here is the right way to sell ice cream.. 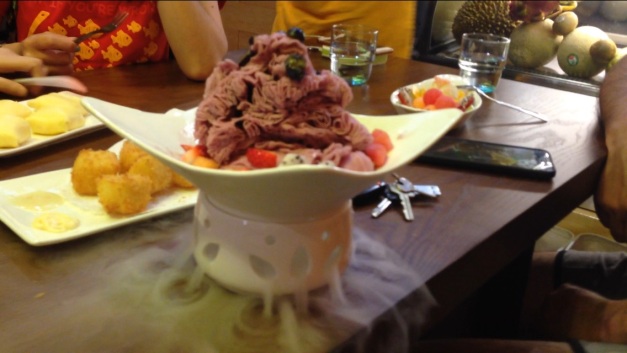