Posted by gaomingwu on May 6, 2013
Posted in: Uncategorized. Leave a comment

1. One of the toilets in the house was clogged for some reason (maybe even for someone’s defecation) the other day. I fixed it using a plunger and informed people during the house meeting. People thanked me but still wondered who actually clogged the toilet. Teddy was like, “I think that looks like John’s work…”

2. Rama asked us a question during his class the other day like, “Answer this question. I need expedition and accuracy.” Since nobody knew the answer, he asked again, “Is the requirement too demanding?” I was like, “Yeah, I think it can only be either one…”

3. Amy quit her house job as a treasurer due to her graduation and asked who would like to take over during the house meeting the other day. Since at first nobody volunteered, she encouraged people by saying, “The job is nice and easy.” So I kidded her like, “For sure. If you can do it, everybody can do it…”

4. Margo and I were cooking house dinner the other day, while Amy was chilling with us. When the girls were having some girls’ talk, Margo asked Amy about how to deal with a guy. I couldn’t help laughing a little bit. Margo asked me why. I kidded them like, “I laughed, because I can’t believe you actually asked Amy for dating tips and believed that’s a good idea…”

I played soccer a little bit yesterday. Even though my knee hurt a little bit, it didn’t hurt how nice the weather was for soccer!! 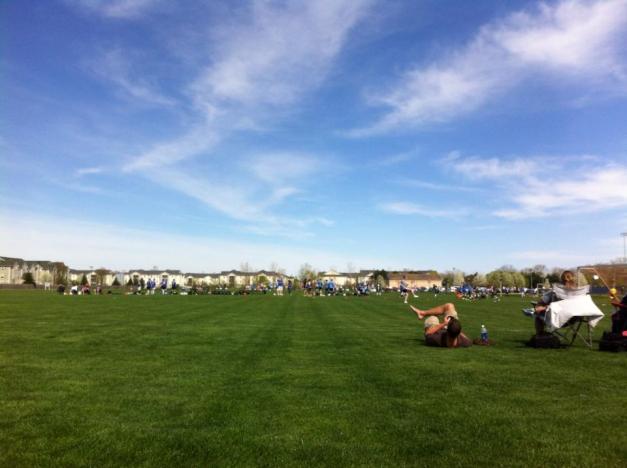