Posted by gaomingwu on December 19, 2011
Posted in: Uncategorized. Leave a comment

1. I got downstairs and saw Steve and Anna in the galley, so I told them I was planning to perform an English comedian show for Chinese students’ spring festival and hoped they can give me some suggestion when I am ready.

“You know what is funny? Get naked.” Steve offered suggestions immediately.

“Yeah, Steve used to do that in his room so that Earl (Steve’s roommate) could give him feedback.” Anna commented.

“And maybe also some feedforth as well as back-and-forth afterwards…..” I revealed the truth a little bit further.

2. We were waiting for Earl using the bathroom in the gallery so that we could go to Sugar Berry for Ice cream the other night. He didn’t show up for a while so that someone asked, “What the hell is he doing in the bathroom?”

“Maybe he needs a hand.” I replied.

3. Earl kept calling me Farton (indicating “fart”) instead of Barton. “Hey Earl, do you even know you are a fartist?” I accused of him punching to fascist.

4. We were getting ready to play soccer in the living room when Andrea asked me how the budget can handle whole sale toilet paper for the house. Martin interrupted, “Hey we should get whole sale condoms for house. I need really really thin ones. Those if-it’s-not-broken-you do-it-wrong ones.”

“Oh, I need the opposite. I wanna have really really thick ones. I don’t wanna feel a thing.” Earl claimed his preference. 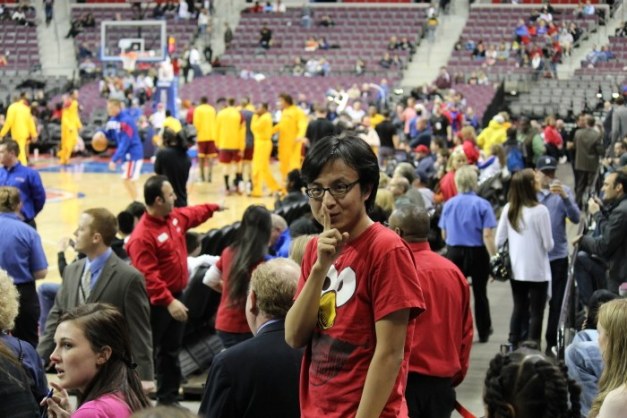 NBA preseason Game, Piston vs Cavalier. $18 for the seat on the first row of the floor… -Detroit MI, Dec 2012