Posted by gaomingwu on November 2, 2013
Posted in: Uncategorized. Leave a comment

1.2 In the end we found a Japanese restaurant and sat besides the window. I was like, “Cool. It’s a street view.” Others agreed with me, while I found a car parking in the front of the window. So I corrected me like, “Oh, it’s actually a vehicle view.”

2. Varun got married in India one year ago and we were discussing about what he should do to make this marriage official in USA the other day. I was like, “Maybe to change the status on Facebook?”

3. Keerthana liked to sigh a lot for no reason in the office. She came in the office in the morning the other day and made a big sigh before seating herself to work. I kidded her like, “Huh, that sounds a really good start of day…”

4. We started to receive a lot of spam calls in the office a couple weeks ago but had no idea why. I was like, “Maybe someone listed the number on some dating website?”

This soccer season ended a couple of weeks ago. We did well in group game with 3 wins 1 loss, but got eliminated in the first playoff game. But still, it’s been pretty fun to play! 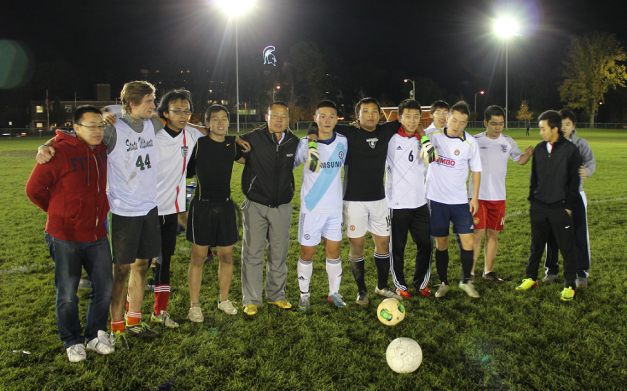